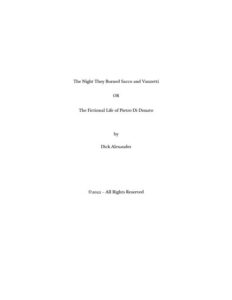 The Night They Burned Sacco and Vanzetti

A Novel by Dick Alexander

The Night They Burned Sacco and Vanzetti, or, The Fictional Life of Pietro Di Donato, comprises a tale immersed in the fantastic atmospherics of 1969, the era of the My Lai massacre and the year Di Donato began his convention-smashing final work.

In the early ’70s Dick Alexander was the neighborhood kid on Strong’s Neck who mowed Di Donato’s lawn. Years later, after following in the footsteps of his neighbor and mentor, the writer Alexander reveals a Di Donato never before seen – He tells a conjured-up chronicle of the man, his times, his family, and — the parapsychic events which fueled Pietro Di Donato’s obsessed last project.