The Aldo Moro Article, "Christ in Plastic" - Pietro Di Donato was the master of the short-story form, beginning with the 1937 Esquire story, and ending his long run of feature articles in the magazines with this stunning account of the 1978 abduction, and subsequent execution weeks later, of the prime minister of Italy, Aldo Moro.

Had the writer miraculously penetrated a cell of the famous "Brigate Rosse" - the Red Brigades; or was the article the heart-wrenching account of the pawn Moro sprung whole cloth from the genius of the author, sent to Italy on an investigative assignment? We will never be fully sure of the answer. But what is fact is that the riveting piece won the prestigious Overseas Press Award for the year 1978.

My People, My Place - Of all the articles that are, or will be on this site, we consider this the lost gem of them all: "My People, My Place" appeared in Coronet Magazine in 1958. It is a uniquely masterful blend of two major talents of the time: The writer Pietro Di Donato, and the acclaimed Magnum photographer Eve Arnold. Arnold was already recognized as one of the true pioneers of photojournalism at the time, and would shortly go on to become Marilyn Monroe's trusted photographer, capturing what are considered the actresses most personal moments. Coronet was a very popular monthly publication at the news stands, and was recognized for its smaller travel-size format, broad range of timely, informative, entertaining pieces featuring good writing, artwork and photography.

The House - Wonderful and charming  short story displaying the writer's one-of-a-kind ability, painting an insightful era: placed circa 1950, the characters are of the post-war first generation Italians born in America. The setting is the Palisades of Hoboken, the neighborhood overlooking the Hudson and a few short miles from the original setting of Christ in Concrete's West Hoboken.

Little Wonder Italian Restaurants - In 1962, this wonderful article, made up of over 10 restaurant reviews from New York's Little Italy, appeared in the splashy pages of the country's premier travel magazine, Holiday. The editors assigned him to scout out the unusual and the authentic; the restaurants were also to be the sometimes overlooked, more affordable establishments in the colorful Italian neighborhood bordering New York's China Town in Lower Manhattan. The result the writer presented them was nothing less than spectacular, beautifully written - and delicious! Don't miss the stunning black & white, full-page photo originally opposite the article title page (shown here above the lead-in).

When Willy K. Vanderbilt Frolicked and I Shoveled His Snow - (Nugget Magazine, November 1963) - Poor people try to ape the rich; why should the rich be denied the privilege of aping the poor?” asks Di Donato in this hidden gem from the November 1963 issue of Nugget Magazine. Di Donato takes the real-life testimony of Dora Blowers — a woman who came forward after baron William K. Vanderbilt’s death in 1948 to claim that she and Vanderbilt were secretly married and had three children together — and weaves it together with personal memoir to give us a Gatsby-like tale of wealth, privilege, and the illusion of justice.

Ladies of the Roman Night - OUI Magazine, January, 1976 - A sympathetic and very Italian treatment of the sub-culture existing along side the chic and touristy world of  Rome's Piazza di Spagna circa the 70s. A OUI reader's letter to the editor which appeared in the following month's issue, stated: "Pietro Di Donato is the best writer around."

Feel and smell the streets of Rome, the halls and rooms of Pensione Sorriso; revel in the characters, their quirky passions and preferences, as only Di Donato can deliver to the armchair traveler.

The Widow of Whadda-you-want - The subject of Italian nicknames and their evolution born of the boroughs of metropolis New York, is most popular these days. But Di Donato exposed the American reader to splendid examples early on in the debut of Christ in Concrete as a short story in Esquire magazine; and two years later of course with the publication of the novel.

Here, in the raucous tale of The Widow of Whadda-you-want, he develops the theme to a level approaching Buffo, spiced up with a generous portion of Old World Italian lore and superstition. The story was included in a highbrow collection published by Pocket Books entitled discovery, showcasing the best American short stories of 1952.

The Lily Pond - Unpublished short story, circa 1970; unavailable until now. Top New York literary agent of his day, Scott Meredith, was unable to place this commercially problematic piece. What was viewed as a disturbing and inaccessible story fifty years ago, today reads as a prime example of the author's artistic prowess.

The Flesh, the Devil and Santiago - Santiago the blacksmith, and the tale surrounding his heartbreak and destruction, underwent several incarnations between his inception in this 1958 issue of Nugget magazine, and the final version of the story which appeared in Playboy in the late 1960's as "The Hayloft." Noteworthy is the reworking of the tragic betrayal by his beautiful and very young mulatto wife, Stella L'Africana, which occupies key chapters in Di Donato's 1960 novel, Three Circles of Light.

Hicky Nicky the Floatin' Bricky (KNIGHT mag. circa 1958) - Who else but Di Donato could set a piece on the construction site with such authenticity - this almost mythological battle between Hicky Nicky and his foe, tumbling through brick walls like the Clash of the Titans, jumps off the page with visceral realism - Bravo!

Win a Kewpie Doll (KNIGHT mag. circa 1958) - And Pietro Di Donato contributes a wryly, humorous character study in "Win a Kewpie Doll" - is how the 'Editor's Notebook' (in pink, p. 40) describes this charming but strange little piece. Nevertheless, that unmistakable mix of fleshy sensuality and simpatico, of the author's, delivers charm and Di Donato's brand of entertainment as always.

A Gift from Dottie Ryan (BLUEBOOK FOR MEN mag. August, 1961) - Underworld kingpin Boss Marino has contracted a most unwelcome "present" from his kept girlfriend, showgirl Dottie Ryan; and is heading for a ghastly-gruesome death straight out of The Inferno - This Di Donato gem has it all: The Madonna; sex; Little Italy; the mob; Mamma Marino; revenge; surreal madness; brain-drilling spirochetes and all the accompanying stinking, rotting purulence as only Di Donato can deliver - This one is the author at his most shocking, decidedly un-PC, great-fun-and-great-prose best. A Gift from Dottie Ryan is sure to drill into your brain, too. Enjoy!

Border Episodes (OUI mag., 1974) - Drinking mezcal all night with modern-day Aztecs, Di Donato is fully convinced he's going to be sacrificed to their Sun God in the morning. As usual, decades ahead of his time, the author foretells the bitter border tensions to come.

A Rinascimento on L.I. (NY Times, Nov. 14, 1971) - Highly amusing, spun as only Di Donato knew how, this 1971 Times article is not only entertaining, but today we realize it to be an important piece documenting the migration of the Italo-American generations from the NYC boroughs, and the New Jersey Palisades, out through Nassau County and into Suffolk County on Long Island.

The Roman Circus of Bernardo Bertolucci (OUI mag. December, 1974.) Here’s what a discerning reader had to say about: the author’s treatment of Bertolucci’s father, the famous Italian poet Attilio Bertolucci; his pampered protégé son; the then newly-released Last Tango in Paris; and Di Donato’s unique Roman immersion as only he could conjure up. 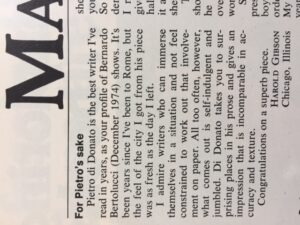